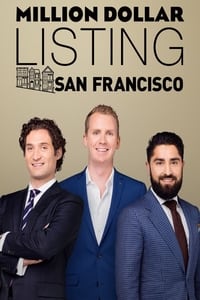 1
The New Gold Rush
2
Remember the Alamo Listing
3
When You Wish Upon a Starchitect
4
Fights in Bernal Heights
5
We'll Always Have Paris...
6
We Are the Chammy-ions
7
Carry On, Hayward Son
8
St. Louie Blues
9
I Don't Have Time for This, Tiny Man!
Season 1

The Bay Area is in the midst of a real estate boom, with many young tech workers calling the area home and willing to spend big bucks for some of the most expensive properties in the U.S. Competition in the market is stiff, and agents are always competing to land new clients; three of those agents are profiled in this series. San Francisco native and luxury broker Justin Fichelson is a pro at networking, and his relationships with venture capitalists and Silicon Valley entrepreneurs help him get ahead in the game. Roh Habibi, who was born in Afghanistan but raised in the Bay Area, is willing to do whatever it takes to close a deal, which has helped him make it to the top of the profession in just a few years in the business. Andrew Greenwell's philosophy -- go big or don't go at all -- has helped lead him to become CEO of a real estate company.
Gatunek: Reality
Countries: US
Released on: 7 Jul 2015