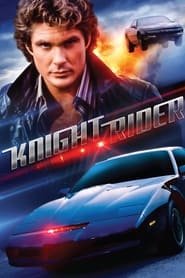 Episode title: Knight of the Juggernaut

Knight Rider s04e01 tracklist: help us to build the biggest library of soundtracks.

Michael and K.I.T.T.'s latest assignment, to guard a volatile new isotope in Chicago, looks as if it could be their last, when the late Wilton Knight's daughter Jennifer plans to shut down their division of FLAG, and suspends Michael. But meanwhile, international terrorist Phillip Nordstrom kidnaps Devon, and uses hi-tech laser surgery on a criminal to create an impostor, as part of Nordstrom's plot to get his hands on the valuable isotope. Even though suspended, Michael becomes suspicious of (the impostor) Devon's behaviour and investigates â€“ but Nordstrom plans to get rid of their interference, coating K.I.T.T. in a chemical to break down his molecular amour coating, before turning loose ""The Juggernaut"" â€“ a deadly mobile battering ram...
Gatunek: Action & Adventure, Drama, Sci-Fi & Fantasy
Countries: US
Released on: 19 Sep 1985     Boxoffice: unknown