Experiment in Terror soundtrack: complete list of songs used in the movie/tv show. 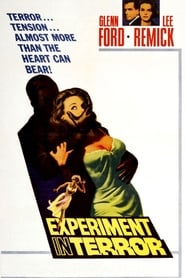 Experiment in Terror tracklist: help us to build the biggest library of soundtracks.

Experiment in Terror songs: full list of tracks included in your favourite film.

Experiment in Terror About

Kelly Sherwood is terrorized by a man with an asthmatic voice who plans to use her to steal $100,000 from the bank where she works. He threatens to kill her teenage sister Toby, if she tells the police. However she manages to contact F.B.I. agent Ripley.
Gatunek: Crime, Thriller
Countries: United States of America
Released on: 12 Apr 1962     Boxoffice: unknown

Soundtrack Experiment in Terror music above, see and visit videos to listen the song.