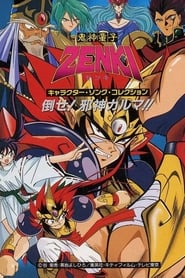 1
Zenki Gaiden: Anki Kitan
Specials
1
The fierce guardian spirit awakens
2
Karuma the demon and her three demon disciples
3
Shut in by the shutter
4
The pot filled with desire
5
Tastes like fresh Zenki
6
The boy and the telephone
7
Run for the finish line of desire
8
Welcome to Hotel Mummy
9
A demon in the basement and the fire spell
10
A boy and his dogs
11
The night song of the samurai
12
Memories buried in the snow
13
The challenge of the wishing plaques
14
Reveal Zenki's secret
15
The plan of sealing up the guardian spirit
16
The spell of darkness. Souma vs Anju
17
The servant of evil falls. Anju's longest day
18
The golden dragon awakens
19
The two Chiakis. 800-year promise
20
Heian capital up in flames. Come, golden axe!
21
The pentagram shrines in the ancient capital
22
Guardian village destroyed. Water formation
23
Goula the traitor
24
Come back to life Zenki! Flame formation
25
The last battle! The end of Karuma
26
Eve of the guardian spirit festival
27
A New Enemy
28
The awakening of the heartbeat! Akira's secret
29
Roar Out!
30
Stolen faces. Beware of the pick-up artist!
31
The hands that create souls
32
Terror by the lake. Listen to the song of the spirit
33
Fragments of desire. Chiaki in big trouble!
34
Jukai runs for office!
35
An arrow that pierces the full moon. Ichiko's secret
36
Forbidden garden. Let's put flowers on our heads
37
A star is born. Got the punch line?
38
The nightmare of the lost pool. Souma returns
39
Hirumaki's scheme. The shadow of death creeps
40
Dangerous encounter. Sayaka's crush
41
Kokutei gets kidnapped. Assissinate the dog diety!
42
Akira's the target. Attacker from the Realm of the Dead
43
Darkness approaches. Chiaki gets tested
44
The miracle of Mother Mary. The memories of an ancient jewel
45
Kazue dies at dawn! Kill the phantom karuma beast!
46
Beautiful beast. Negation power
47
Enno shrine under attack. Come, Earth Dragon staff!
48
The fate of the moon & the wolf. Beyond the white & silver!
49
The guardian spirit vs. the dog diety. The last battle of destiny
50
The god of destruction arrives. Fight, courageous ones
51
Go guardian spirit! Golden axe Ludora
Season 1

Zenki is a Japanese manga series written by Kikuhide Tani and illustrated by Yoshihiro Kuroiwa. It was serealized in the Shueisha publication, Monthly Shōnen Jump from 1992 to 1996. Zenki was adapted into a fifty-one episode anime television series in 1995 by Studio Deen and also spawned five video games. Enoki Films handles the English language version of the anime.
Gatunek: Sci-Fi & Fantasy, Animation, Comedy, Action & Adventure
Countries: JP
Released on: 9 Jan 1995