The Better Half soundtrack

The Better Half tracklist

The Better Half soundtrack: complete list of songs used in the movie/tv show. 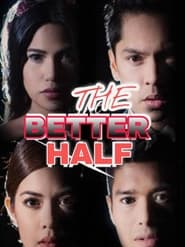 The Better Half About