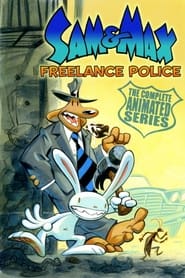 1
Vice Squad
2
Our Bewildering Universe! 'Chock Full O Guts
3
Artsy Craftsy Bit Of Time-Wasting Nonsense
4
A COMIC-CONversation with Steve Purcel
5
Alien Autopsy
6
Telling the Tale of Telltale Games
7
Steve Purcell Chats With a Fan
8
Our Bewildering Universal
Specials
1
The Thing That Wouldn't Stop It
2
The Second Show Ever
3
Max's Big Day
4
Bad Day On The Moon
5
Dysfunction Of The Gods
6
They Came From Down There
7
Big Trouble At The Earth's Core
8
The Friend For Life
9
A Glitch In Time
10
That Darn Gator
11
Christmas Bloody Christmas
12
We Drop At Dawn
13
Kiss Kiss Bang Bang / The Monkeys from O.N.C.L.E.
14
It's Dangly Deever Time
15
Have a Heart (Tonight We Love)
16
The Glazed McGuffin Affair
17
The Tell Tale Tail
18
The Trouble With Gary
19
AAIIIEEE, Robot!
20
The Invaders
21
Sam and Max Vs the Uglions from Outer Space (Fools Die On Friday)
22
Fools Die On Friday
23
Little Bigfoot
24
The Final Episode
Sam and max freelance police season 1

The Adventures of Sam & Max: Freelance Police About

The Adventures of Sam &amp; Max: Freelance Police, Sam &amp; Max: Freelance Police!!! or just simply Sam &amp; Max, is an American animated television series starring Sam &amp; Max, a duo of private investigators composed of Sam, an anthropomorphic dog, and Max, a lagomorph or "hyperkinetic rabbity-thing." The show was created by Steve Purcell, also creator of the original comic book series. The series first aired in October 1997 on Fox Kids in the United States and YTV in Canada, producing 24 episodes and winning the 1998 Gemini Award for "Best Animated Series" before it was canceled in April 1998. With the exception of the first and last episodes, which each had a running time of about 20 minutes, each episode was approximately 10 minutes in length, and were usually aired in pairs.
Gatunek: Action & Adventure, Animation, Comedy
Countries: CA, US
Released on: 3 Oct 1997