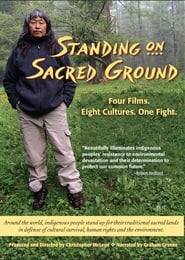 Standing on Sacred Ground About

Indigenous people resist government mega-projects, consumer culture, competing religions, resource extraction and climate change in this four-part documentary series. In the US and around the world, native communities share ecological wisdom and spiritual reverence while battling a utilitarian view of land. Narrated by Graham Greene, with the voices of Tantoo Cardinal and Q'orianka Kilcher.
Gatunek: Documentary