Leave It to Bryan soundtrack

HomeLeave It to Bryan

Leave It to Bryan tracklist

Leave It to Bryan soundtrack: complete list of songs used in the movie/tv show/game. 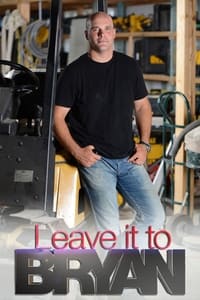 1
Renovation Standoff
2
Grounded Reno
3
Behind Closed Walls
4
Shotgun Reno
5
Reno Under Pressure
6
The DIY Effect
7
Sister Act
8
Banished Bachelor
9
Space Wars
10
Deal or No Deal
11
Double Trouble
12
Reno Shock
13
Reno Apocalypse
Season 1
1
Backseat Contractor
2
Reno Rescue
3
The Reno Antagonist
4
Curbed Reno
5
The Way the Reno Crumbles
6
The Wall of Blame
7
Baby Misteps
8
Looks Are Deceiving
9
Reno Rut
10
Builders Block
11
Reno Roadblock
12
Reno Backfire
13
Decision Revision
14
Reno Big or Go Home
15
Mish Mash Mess
16
Plan Interrupted
17
All Stack No Action
18
Dance Dance Renovation
19
BLVD of Broken Beams
20
Reno Reality Check
21
Snakes in a Drain
Season 2
1
Reno Misteps
2
Battling Budgets
3
Law & Mortar
4
As Bad as it Gets
5
The Wrong Footing
6
Reno Impact
7
Safety Dance
8
Wall Me Maybe
9
Post with the Most
10
A Leak of Faith
11
Bursting at the Beams
12
Labour Intensive
13
Going Walls Out
14
Path of Most Resistance
15
Safety Worst
16
Say Your Prayers
17
Get Your Leak On
18
Grout of Site
19
Shading Spaces
20
Get into the Move
21
The Price is Fight
22
Construction Fore-Mom
23
Rocky Road
24
Skeptic Tank
25
Painted Flack
26
Bricking Time Bomb
Season 3
1
Between Gyprock and a Hard Place
2
A Can of Squirms
3
House Wreck of Bryan
4
Boiler Alert
5
Pain in the Grass
6
Where It Drains It Pours
7
Bluff Love
8
The Fighting's on the Wall
9
Pressure Cooker
10
Housing Crisis
11
Reno Ride
12
All Hands on Wreck
13
Ramp My Style
14
Flood Bath
15
Leave It to Bryan
16
Detailed Disoriented
17
Rent Out of Shape
18
Motion to Dismantle
19
Reviving the Roost
20
Wishing and Coping
21
Daddy Duty
22
Came in Like Eric-ing Ball
23
Chain of Tools
24
Before the Cookie Crumbles
25
Having a Wall
26
A Cut Above
27
Climbing the Walls
Season 4
1
Overlook the Details
2
Another Level
3
Sew Close
4
Come Hell or High Water
5
Checks Please
6
Cut It Out
7
Twist and Doubt
8
All About the Base
9
Giving Up Green
10
Turn Down or What
11
Pillar Instinct
12
Royal Pain
13
Electric Feel
Season 5
1
The Point of it All
2
Ants In Their Pants
3
The Hole Shebang
4
Wiggle Room
5
To The Window, To The Walls
6
Stone Faced
7
The Right Stuff
8
Inside The Box
9
Wet Wipe
10
Tri Again
11
Can't Feel My Place
12
Raw Deal
13
Buzz Kill
Season 6
1
The Reno-way Bride
2
High Steaks
3
What the Smell
4
Stone Tag
5
Worst Time Home Buyer
6
Happy Two Feet
7
Good Cop Dad Hops
8
Over the Honeymoon
9
Shock and Roll
10
Kill Drill
11
Gold Meddle-ist
12
Paddle Tale
13
Doubt and About
Season 7

SoundtrackLeave It to Bryan songsFull tracklist

Leave It to Bryan About

Leave It to Bryan is a Canadian home renovation reality series hosted by contractor Bryan Baeumler, which premiered in January 2012 on HGTV. The show is based around the concept that the renovations most desired by a homeowner aren't necessarily always the ones most urgently needed in the home. Baeumler has described the series as inspired by various past clients who wanted big-ticket renovations, such as kitchen or bathroom upgrades or home theatre spaces, while neglecting or even being entirely unaware of structural deficiencies that were much more critical to the value of their home, or even to their basic physical health and safety. He has suggested in interviews that this issue has become so common that many North American cities will face a major housing crisis within 15 to 20 years, as an increasing number of homes risk becoming entirely uninhabitable, if homeowners continue to emphasize lifestyle luxuries over basic structural improvements. Episodes typically revolve around homeowners who may not realize that they have neglected a critical structural issue, couples who disagree on which renovation should be the immediate priority within their renovation budget, or other situations where the homeowners' wants and needs may be in conflict. In each episode, Baeumler meets with the homeowner to identify the desired renovation, while also assessing the home to identify whether another renovation is more critical; he subsequently returns to the home and begins the renovation he has identified as the most immediate requirement, and the homeowners only learn which project he has actually chosen after the renovation is already underway. The show is produced by Si Entertainment in Toronto and the GTA.