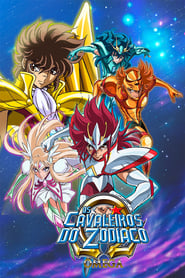 Athena Saori watches over peace on Earth from Sanctuary and over young Kōga, until an invader causes commotion when he tries to kidnap Athena and the baby. Kōga is saved from certain death by the timely arrival of Gold Saint Seiya, who engages the mysterious invader, who reveals his identity as Mars. A new conflict begins as Seiya and Mars battle for the fate of Kōga, who years later, determined to live his life as he sees fit, challenges Athena.
Script: Reiko Yoshida, Akatsuki Yamatoya, Michiko Yokote      Gatunek: Sci-Fi & Fantasy, Animation, Action & Adventure
Countries: JP
Released on: 1 Apr 2012     Boxoffice: unknown