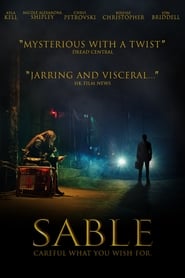 Sable tracklist: help us to build the biggest library of soundtracks.

Caught between her dreams of a better life, a rich mobster who thinks he owns her and an unstable boyfriend who has just killed a man, Sable must take control of her own life or she may find herself dead by dawn.
Gatunek: Drama, Thriller, Crime, Mystery
Countries: United States of America
Released on: 21 Feb 2017     Boxoffice: unknown

Soundtrack Sable music above, see and visit videos to listen the song.