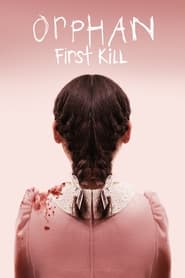 Orphan: First Kill tracklist: help us to build the biggest library of soundtracks.

After escaping from an Estonian psychiatric facility, Leena Klammer travels to America by impersonating Esther, the missing daughter of a wealthy family. But when her mask starts to slip, she is put against a mother who will protect her family from the murderous “child” at any cost.
Gatunek: Horror, Thriller
Countries: Canada, United States of America
Released on: 26 Jul 2022     Boxoffice: unknown