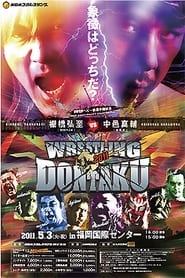 NJPW Wrestling Dontaku 2011 tracklist: help us to build the biggest library of soundtracks.

Wrestling Dontaku 2011 was a professional wrestling pay-per-view (PPV) event promoted by New Japan Pro-Wrestling (NJPW). The event took place on May 3, 2011, in Fukuoka, Fukuoka, at the Fukuoka Kokusai Center. The event featured 10 matches, 4 of which were contested for championships. The Main Event featured The IWGP Heavyweight Championship on the line as Shinsuke Nakamura challenges Hiroshi Tanahashi.