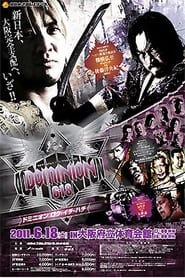 NJPW Dominion 6.18 2011 tracklist: help us to build the biggest library of soundtracks.

Dominion 6.18 was a professional wrestling pay-per-view (PPV) event promoted by New Japan Pro-Wrestling (NJPW). The event took place on June 18, 2011, in Osaka, Osaka, at the Osaka Prefectural Gymnasium. The event featured ten matches, five of which were contested for championships. The Main Event was Hirooki Goto challenging Hiroshi Tanahashi for the IWGP Heavyweight Championship.

Soundtrack NJPW Dominion 6.18 2011 music above, see and visit videos to listen the song.