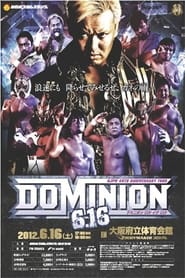 NJPW Dominion 6.16 2012 tracklist: help us to build the biggest library of soundtracks.

Dominion 6.16 was a professional wrestling pay-per-view (PPV) event promoted by New Japan Pro-Wrestling (NJPW). The event took place on June 16, 2012, in Osaka, Osaka, at the newly renamed Bodymaker Colosseum. The event featured ten matches, four of which were contested for championships. The Main Event Was Hiroshi Tanahashi vs Kazuchika Okada for the IWGP Heavyweight Championshi. It was the fourth event under the Dominion name.

Soundtrack NJPW Dominion 6.16 2012 music above, see and visit videos to listen the song.