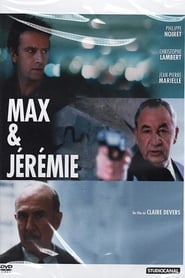 Max & Jeremie tracklist: help us to build the biggest library of soundtracks.

Even among bombers and murderers, there is a social ladder, a hierarchy to climb. Jeremie is a mere bomber who blows up people and places for mobsters in Paris. He may not look it, scruffy lad that he is, but he is a sensitive fellow, and he feels his lowly status keenly. If only he could graduate to the ranks of hitmen, who are honored in his world, perhaps then he would feel more like somebody. He finally gets his chance when he receives instructions to kill the eminent hitman Max, who knows too much to be left alive. Instead of planning a cool and distant hit, Jeremie gets to know his quarry personally and thereby gets entangled in a mass of conflicting allegiances. Max has one more assignment and has asked Jeremie to help him with it. The hero-worshipping boy can't bring himself to knock of this classy guy. However, just having such an inept apprentice as Jeremie around is enormously dangerous for the soon-to-be-retired killer.
Gatunek: Drama, Comedy, Thriller, Crime
Countries: France, Italy
Released on: 13 Oct 1992     Boxoffice: unknown

Soundtrack Max & Jeremie music above, see and visit videos to listen the song.