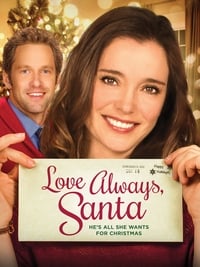 Love Always, Santa tracklist: help us to build the biggest library of soundtracks.

After losing her husband Bradley three years ago on Christmas Day, Celia Banks never thought she’d fall in love again. Now, her entire world revolves around taking care of her daughter, Lilly. Lilly writes a letter to Santa with one wish – for her mommy to be happy and find love again.
Gatunek: TV Movie, Romance, Comedy