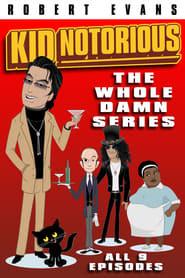 Kid Notorious s01e02 tracklist: help us to build the biggest library of soundtracks.

While entertaining Bill Gates, Rupert Murdoch, and Warren Buffet, Evans learns of Slash's ability to make the best soup he's ever tasted. He feels it could be a big hit and finally be able to get him some F-U money. He shops it around to famous chef's Wolfgang Puck and Emeril, both of whom are eager to taste. But when he goes to get them samples, he learns that Tollie Mae has destroyed the only batch remaining. To top it off, the key ingredient--yak's milk--is only available in the mountains of Nepal from the golden yak. In order to obtain the milk, Evans sells a fake movie to a studio to get them to finance the trip to Nepal. Once there, he promises to make the tribal leader the lead star in exchange for the yaks. Unfortunately, the studio boss, Stein, arrives and demands to know the progress of the film. Knowing he's trapped, Evans and the group escape with two golden yaks. Back in Woodland, he holds an opening premiere for the soup. Many people bid for the rights to the soup. Evans
Gatunek: Animation, Comedy
Countries: US
Released on: 28 Oct 2003     Boxoffice: unknown