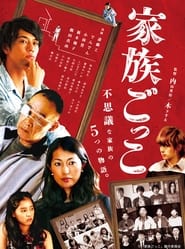 Kazoku gokko tracklist: help us to build the biggest library of soundtracks.

Different people and five different families are acting out various scenarios, scripts and what-ifs. First there is the four Suzuki family members, who are not, sitting around a table in isolation. Then there is the unveiling of a will and what happens when it is read out, there are the sisters who are at it against each other, then there is the funeral that does not go according to plan and more.
Gatunek: Comedy, Drama
Countries: Japan
Released on: 31 Jul 2015     Boxoffice: unknown

Soundtrack Kazoku gokko music above, see and visit videos to listen the song.