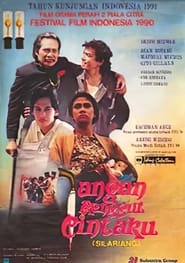 Jangan Renggut Cintaku tracklist: help us to build the biggest library of soundtracks.

This story is an attempt to feature the local customs of South Sulawesi that form the background for the film. Andi Patongai (Gito Gilas) has fallen in love with Andi Tenriwaru (Dian Nitami), although their relationship is not approved by Tenri’s parents because there is a long-standing feud between them and the parents of Patongai. These two teenagers then elope. This results in the illness of Tenri’s father, who calls for his son, Andi Sumange (Mathias Muchus), who is a fugitive from the police. He instructs Sumange to follow the young couple and to kill Tenri’s husband. Just as Sumange is ready to plunge his dagger into Patongai, he hears his sister Tenri’s cries of pain as she is delivering the couple’s first child. Sumange sets aside his violent intentions and embraces Patongai.