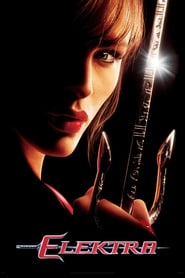 Elektra tracklist: help us to build the biggest library of soundtracks.

Elektra the warrior survives a near-death experience, becomes an assassin-for-hire, and tries to protect her two latest targets, a single father and his young daughter, from a group of supernatural assassins.
Gatunek: Action, Fantasy, Science Fiction
Countries: Canada, United States of America
Released on: 12 Jan 2005     Boxoffice: $43000000

Soundtrack Elektra music above, see and visit videos to listen the song.