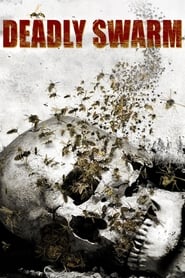 Deadly Swarm tracklist: help us to build the biggest library of soundtracks.

Seeking out a cure for his wife's serious illness, scientist Dr. Schroeder (McCormack) heads deep into a forbidden jungle in Guatemala, trapping thousands of killer wasps. Working with secret military backing, it is Schroeder's contention that the venom from the wasp's stingers can be of great medicinal benefit. But when they try to illegally smuggle the wasps into the US, the truck they are on crashes and the wasps are set free to wreak havoc, making a direct path to a small unsuspecting town. It is up to an American entomologist Daniel Lang and a nosey writer Sandra Kern to stop these deadly wasps - as they lay eggs in their victims to hatch thousands more wasps - before it's too late.
Gatunek: Thriller, Horror, Science Fiction

Soundtrack Deadly Swarm music above, see and visit videos to listen the song.