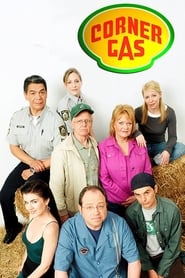 Corner Gas s06e19 tracklist: help us to build the biggest library of soundtracks.

What was the song that was playing as Lacey drove away in season 6 episode 19?

In the sensational, not-to-be-missed, top-secret final episode, Brent's mysterious disappearance every Wednesday night has the whole town talking. When it is discovered he has been pursuing a lifelong dream, the gang is forced to cope with the news. After six unforgettable seasons, how will Canada's favourite comedy series come to an end?
Gatunek: Comedy
Countries: CA
Released on: 12 Apr 2009     Boxoffice: unknown