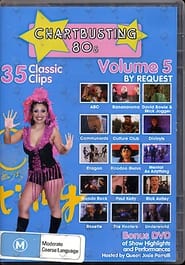 CHARTBUSTING 80s Volume 5 tracklist: help us to build the biggest library of soundtracks.

"Chartbusting 80s Vol 5 - By Request" features the 35 most requested 80s clips as voted for by fans of the top rating Channel 31 show, hosted by Queen Josie Parrelli. Included on this DVD are classic clips from New Order, Divinyls, Mondo Rock, David Bowie and Mick Jagger, twisted Sister, Rick Springfield, Men at Work. Communards, Underworld and many more! Also included is a bonus DVD of highlights and performances from Chartbusting 80s 2007 season. The clips featured on this DVD are the original versions and have not been digitally remastered - therefore the sound and vision quality may vary.
Gatunek: Music
Countries: Australia
Released on: 31 Dec 2006     Boxoffice: unknown