Breathing Under Water soundtrack: complete list of songs used in the movie/tv show/game. 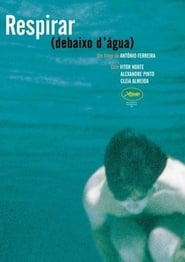 Breathing Under Water tracklist: help us to build the biggest library of soundtracks.

Breathing Under Water songs: full list of tracks included in your favourite film.

Breathing Under Water About

What stops two people from being together? A third one. What stops one person from fighting for another? Nothing. Pedro lives in the suburbs, where he works with his father in a garage. Everyday he takes the bus downtown where he goes to school and meets his friends. It's summertime and they all go down to the river where they spend their free time or even their school time. Among joints, motorbike riding and swimming, everything seems to go well with this group of friends, until the moment when Pedro and his best friend find out that both of them like the same girl. Pedro finds himself inside a downward spiral, where everything around him seems to fall apart. Like a magnet attracts the iron, Pedro seems to attract problems, from the school until his relationship with his parents. This is the story of Pedro, who by having his head being pushed down so much learned how to breathe under water.
Gatunek: Drama, Thriller

Soundtrack Breathing Under Water music above, see and visit videos to listen the song.