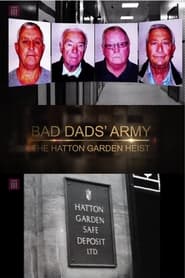 Following the court verdict, which saw more members of the gang responsible for Britain's biggest ever burglary convicted, this is the full, inside story of how they nearly pulled off Easter 2015's £14 million record-breaking heist. With exclusive access to the elite Flying Squad and their dramatic investigation, including remarkable covert surveillance of the thieves boasting at what they'd done and the moment loot was discovered hidden in a cemetery, this is the definitive story of the Hatton Garden heist.
Gatunek: Documentary, Crime